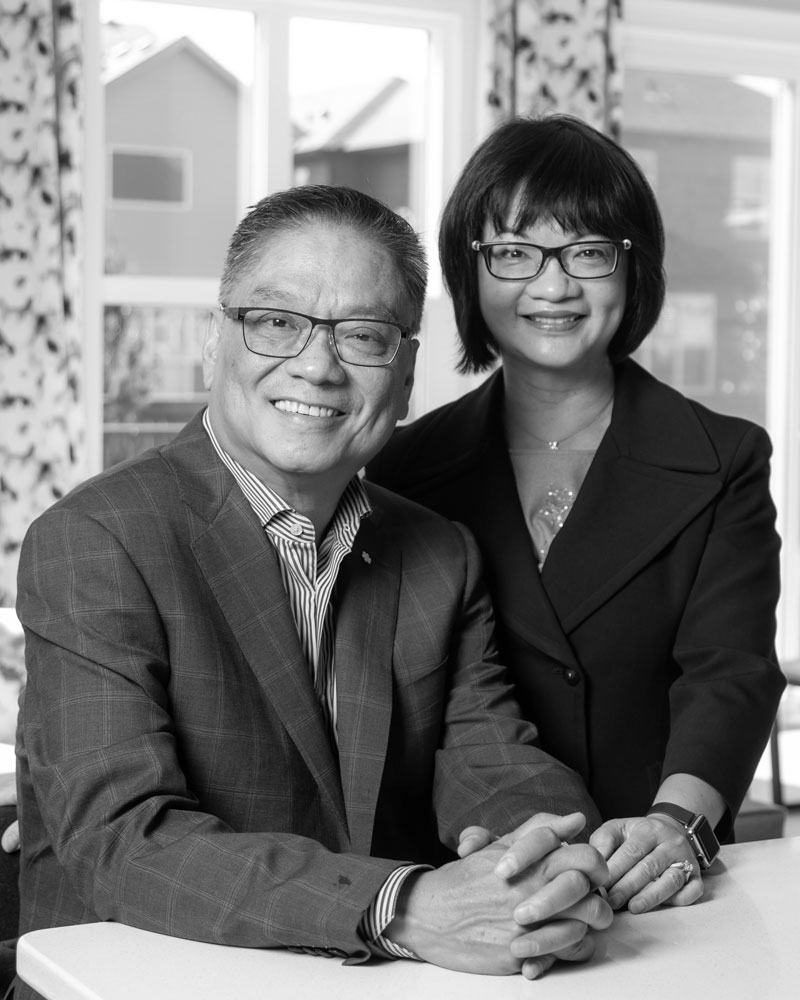 Eleanor Chiu is a successful businesswoman and philanthropist who has left an indelible impact on the City of Calgary. She has a passion for building the sustainability of our society, whether it be for profit, not-for-profit, or charitable organizations. She believes that through social entrepreneurship and ethical business practices, society can work together towards creating a common purpose – that we can do well by doing good – benefitting both the underprivileged and civil society together. Eleanor is an advocate for life-long learning and has made significant contributions to many non-profit organizations such as the Chiniki First Nation, new immigrants, and Calgary’s post- secondary community.

Wayne Chiu, the founder and CEO of the Trico Group, is Eleanor’s spouse and business partner. They immigrated to Canada from Hong Kong in 1982. Eleanor, a Fellow Chartered Professional Accountant, served as the CFO of the group, and together with Wayne, has grown the company into one of Calgary’s Top Builders. Trico has achieved Platinum status as a Best Managed Company, a Best Place to Work in Canada, and a B-Corp certified company in North America.

Eleanor’s professional, business, and entrepreneurial acumen have allowed her to promote and practise the concept of doing well by doing good. In 2008, Eleanor and Wayne founded the Trico Charitable Foundation, which serves as a venue to combine their passion for entrepreneurship and their keen awareness of the need for creative solutions to promote sustainability in the non-profit sector to close gaps in society.

Eleanor is passionate about supporting lifelong, accessible learning. She served as a member of the Board of Governors of Mount Royal University for over six years and is currently serving as a member of the Dean’s Advisory Committee of MRU. She mentors young entrepreneurs, professionals and university students to help shape their careers and business endeavours. In 2014, Bow Valley College unveiled the Chiu School of Business to recognize the Chiu family for their contributions and support of the school of business. In 2016, Eleanor and Wayne received the CASE Benefactor Award from the Council For Advancement and Support of Education for their efforts in promoting post-secondary education.

As an immigrant, Eleanor is ardent in helping newcomers to fit into society and build their careers and new roots in Canada. The Trico Group, as a company, has a diversified team comprised of people from more than 26 different ethnic origins. Eleanor has been instrumental in creating a culture of inclusiveness at Trico. Eleanor is one of the founding board members and financial supporters of Windmill Microlending (previously called Immigrant Access Fund), a charity that provides microloans to immigrants and refugees to obtain Canadian licensing or training in their fields. In 2019, the Center for Newcomers in Calgary made a video featuring Eleanor’s success story to encourage new immigrants to pursue their dreams in Canada.

Eleanor is adamant in promoting the importance of innovation and new technologies. She has sat on boards of various technology and alternative energy solution companies. She believes that by using advanced technologies and ethical business practices, society can benefit from increased efficiency and long term sustainability by creating new values and alternative resources. Her mandate is to combine business acumen and ethical practice with the desire to close social gaps and enhance sustainability, to achieve the goal of doing well by doing good.

Eleanor holds an Institute Certified Director designation and has extensive board governance expertise in both the public sector and business community. She currently serves on the Board of Directors of the Trico Charitable Foundation, the Telus Community Board - Calgary, Sharc Energy System (CSE-SHRC), and Openhouse.AI. She also serves on the Mount Royal University Dean’s Advisory Council and is co-chair of the University of Calgary’s Haskayne Capital Expansion Advisory Council. She has served on the Board of Directors and the Audit Committee of VersaPay (TSX-V), the Board of Governors of Mount Royal University, and was Chairperson of the Audit & Risk Committee and the Investment Committee. She also served as a board member and Governance Committee member of the Alberta Children’s Hospital Foundation and was Treasurer of the Immigrant Access Fund, Leighton Art Foundation, and Oi Kwan Foundation.

Throughout her career, Eleanor has been recognized with numerous awards. She is named a Fellow by the Chartered Professional Accountant (CPA) for her contribution to the profession and the community. In 2018, Eleanor and Wayne received the Senior Executive of the Year Award from the Canadian Institute of Diversity and Inclusion (CIDI) and in 2016, the CASE Benefactor Award from the Council for Advancement & Support of Education. Most recently, Eleanor was one of the recipients of the Calgary Influential Women in Business Award.

Wayne Chiu is a successful Canadian businessman and philanthropist who has left an indelible impact on the City of Calgary. He has a passion for social entrepreneurship, believing that business and society can work together toward common goals. He launched Trico Homes, one of Calgary’s largest home builders. Wayne is an advocate for affordable housing, and has made significant contributions to many non-profit organizations, the Chiniki First Nation, and the city’s post-secondary community.

Wayne Chiu is the Founder and CEO of Trico Homes and the Trico Group of Companies. A Mechanical Engineering graduate from the University of Manitoba and qualified master builder, Wayne continues to be active in all aspects of strategic land development and investment. Under his leadership, Trico has become one of Calgary’s Top 5 Builders.

Wayne’s corporate and entrepreneurial acumen have reinforced his desire to support the communities that have contributed to his success and to promote and practice the concept of doing well by doing good. In 2008, Wayne and his wife and business partner, Eleanor, founded the Trico Charitable Foundation to combine their passion for entrepreneurship and a keen awareness of the need for creative solutions to ensure sustainability in the non-profit sector.

Beyond his business accomplishments, Wayne Chiu is ardent about supporting lifelong, accessible learning. His significant donation helped Mount Royal University establish the Roderick H. Mah Centre for Continuous Learning. Other donations supported SAIT’s Trades and Technology Complex, University of Calgary’s Chiu Family/AstraZeneca Chair in Cardiovascular Health Promotion and Disease Prevention and helped establish the Chiu School of Business at Bow Valley College. He and Trico have long been supporters of the Kids Cancer Care Foundation. He has also served in various capacities with United Way Calgary, the Canadian Youth Business Foundation, Calgary Stampede Foundation Board, Alberta Champions, Bow Valley College, the TELUS Community Board, and many other organizations.

Wayne has been recognized for his business and community accomplishments through various honours, including being named a Member of the Order of Canada and receiving the Queen Elizabeth II Diamond Jubilee and Alberta Centennial medals. He has received an Immigrant of Distinction Award, the Ernst & Young Entrepreneur of the Year Award, the CASE Community College Benefactor Award, and the City of Calgary’s Community Achievement Award. Trico Homes has regularly been recognized as one of “Canada’s Best Workplaces” and among “Canada’s 50 Best Managed Companies.” He is a Member of the Order of Canada, a Canadian national order within Canada’s honours system, and one of our country’s highest civilian honours. Wayne is an appointee of the Alberta Order of Excellence. Most recently, Wayne was a recipient of Canada’s Most Admired CEO.