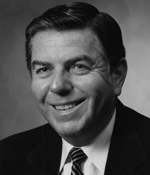 Pat was a proud native Calgarian. He was a graduate of Central High School and went on to graduate from Oklahoma University with a B.Science in Petroleum Engineering.

Pat's entrepreneurial spirit inspired him to build NOWSCO (Nitrogen Oil Well Service Company) in 1962, after leaving Stanolind Oil & Gas. Pat's 33 years as CEO of NOWSCO established him as a highly respected professional within the oil and gas industry and a recipient of numerous awards of recognition. Often sought after for his accomplishments, reputation, personal and professional integrity, Pat served as a board member for many oil and gas service companies, including Collicutt Hanover, Mullen Transportation, NQL Energy Services, United Industrial Services, and Gardner Exploration.

Pat, "THE BIG GUY" was elected into the Petroleum Hall of Fame (also a Founding Director) in 1994 for having developed a new technique for servicing oil wells. He was a finalist for Canadian Entrepreneur of the Year in 1996. He was the Chairman of the 42nd Oilman's Golf Tournament in 1992 and a Director of the Oilman's for several years. An avid sports fan, Pat followed the Calgary Stampeders his entire life. He was a member of the Earl Grey Golf & Country Club, Camelback Golf Course (Phoenix, Arizona) and the Calgary Petroleum Club.

A kind and generous man, Pat gave back to the Calgary community by donating to numerous causes and charities including Stars Ambulance, Fort Calgary, Alberta Children's Hospital and the Cardiology Division, Foothills Medical Centre, Alberta Health Services. Pat Shouldice will be remembered as a "Trail Blazer." He did it all when nobody else knew how to do it. A renowned storyteller, who loved to laugh, this one-of-a-kind proud Irishman.