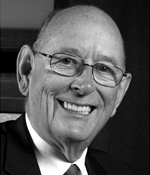 Ross attended Western Canada High School and is a proud native Calgarian. He grew up in Scarboro and attended Sunalta Elementary school and Western Canada High School. Since early childhood he loved sports and became an avid Stampeder's fan, when the team started playing at Mewata Stadium. Ross has not missed many games since then. Ross also loves hockey and was a hockey coach in his early twenties. Ross’s first job was delivering papers. Ross started his career servicing and then selling Underwood and Olivetti typewriters.

RGO Office Products began operating in 1966 with three people and has since grown to a staff of over 275 employees in Calgary, Edmonton and Canmore. From the beginning, RGO has continued to diversify and is now the largest company of its kind in Canada. From inception, RGO has strived to be a “one stop shopping centre” serving Albertans; selling and servicing all products with a full complement of value­added services. Primary product groups are office, hospitality, and institutional furniture; the latest technology in office equipment and a full range of residential and commercial window coverings and flooring. RGO is a privately held company that has an interest in real estate holdings and vertically compatible companies.

RGO Office Products has made significant contributions to the Calgary Performing Arts, the University of Calgary, Mount Royal University, SAIT, Bow Valley College, Calgary Junior Achievement, the Calgary Zoo, the City of Calgary, Heritage Park, the Humane Society, Resolve Campaign and many more local charities. Mr. Glen has a strong commitment to the City, Province and Country that he proudly calls “home”.

Mr. Glen is currently on the Chairman of Bow Valley College’s “Quest for Best Campaign”. He has been involved with the Calgary Chamber of Commerce, on the Board of Directors, the Calgary Stampeders and a Director for the Willow Park Classic. He is also a member of the Alberta Economic Development Board and WPO. He maintains a high profile in the community personally, and as President of RGO Office Products.

When Ross is not working, he enjoys a lot of golf in the summer. He is a very committed Calgary Flames and Calgary Stampeders fan and enjoys almost every single game in his executive suites.

He has been married for over 45 years to his wife Shirley. He has two grown daughters, Cathy & Debbie and five grandchildren.