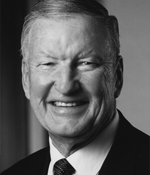 He lived an extraordinary life, building and accomplishing what very few can dream of. Ronald D. Southern lived in Calgary all of his life but traveled the world extensively during his adult years. He was a proud Canadian and loved his Alberta roots.

While still in high school in 1947, Ronald, a self-described “child of commerce”, founded Alberta Trailer Hire with his father Samuel Donald. Starting with five people, the enterprise today –  ATCO Group – has grown to more than 8000 employees worldwide.

ATCO Ltd. and Canadian Utilities Limited, which ATCO acquired and repatriated in 1980, have done business in more than 100 countries around the world.

RD, as Ronald was known by all his friends, was awarded a Companion of the Order of Canada in 2007 and honoured with the Alberta Order of Excellence in 2012.