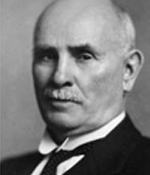 Patrick (Pat) Burns was born on July 6, 1855 in Oshawa Upper Canada. He was the son of Michael Byrne Burns and Bridget Gibson, who were both Irish immigrants. One of 11 children, his family moved to Manitoba in 1878.

He started his career as a labourer on the railroad and later became the "Cattle King" of Western Canada. Pat discovered the hefty profit margins available from the sale of beef. He and his brother John financed their move from Ontario by slaughtering and selling oxen they had been given the previous winter, when their employer was unable to pay them in more conventional currency. With that clever stroke of creative financing, pat was on his way; on his way west and on his way to becoming a very wealthy, respected and influential man. The Burns brothers each bought a quarter section of land in southern Manitoba but working the land was temporarily, out of the question. The trip and the land purchases had depleted their financial resources. They tool jobs on railway crews and hoarded their wages. Within a year, pat was able to begin work on his land. He was also busying and selling cattle at a profit and arranging profitable contracts to supply need to work crews scattered throughout Canada and the United States. One of those contracts was with an old school mate, William MacKenzie. Railroads were Mackenzies's game. He loved to build railways, but in order to do so he needed well-fed construction crews. Pat was on his way to becoming a large-scale beef supplier.

This small beginning was a far cry from the extensive plants and operations of P.Burns and Co. Ltd. of which Pat was the President and driving force. The company was established in Calgary in 1890 and the first building he owned was little more than a hut, but from those most humble beginnings Pat built and empire. It became one of the largest businesses of its kind in the world, with branches in London, Liverpool and Yokohama. His holdings, included five large plants, five export offices, seven branch offices, five wholesale fruit houses, ten creameries and poultry fattening stations as well as over 130 retail markets in western Canada, In addition to these, he owned and operated several hundred thousand acres of farm and grazing lands scattered over that three provinces and ran up to 80,000 head of cattle at the various ranches, By this time the entrepreneur has married Eileen Ellis, the daughter of a successful rancher in British Columbia. Coal was discovered in the Sheep River area around 1900, and was home to one of Pat's business ventures, the Burns Coal Mine. Not much coal was ever shipped from the valley as most of it was stockpiled to await the arrival of the Calgary and Southern Railway, and the mine was eventually shut in the 1920's due to declining demand for coal. However, the land the mine occupied is still privately owned by P. Burns Coal Mines Ltd. and there are still remnants of some old building and stockpiled coal.

The building up of an organization of this size, single-handedly and in such a short time was due to the shrewd business qualities of Pat. He was a simple, straight forward and modest man. Short in stature and stockily built, he owes his success to his ability to plan ahead, a thorough knowledge and proper appreciation of conditions as well as fair and honest dealings with all whom he met in business and elsewhere.

Pat held directorships in several important banking, engineering, and insurance companies. In 1912, he was one of Alberta's "Big Four" cattlemen who, in that year, backed the first ambitious Calgary Stampede. Despite his well-earned status in the community, Pat never lost his sensitivity or concern for people's well being. One small anecdote illustrates this point most succinctly. Apparently, in his travels he noticed a small church of his own denomination was badly in need of paint. He immediately paid to have the job done. When the little church was all spruced up Pat noticed that a neighboring church, of a different denomination looked shoddy by comparison. Pat simply arranged to have that one painted as well.

Pat was a true Albertan, citizen and entrepreneur with a dedicated history of giving back to the communities in which he operated. Today the Burns Memorial Trust oversees the distribution of philanthropic donations with special emphasis on: Salvation Army, Calgary branch, City of Calgary, Children's Shelter, The Father Lacombe Home in Midnapore and the widows and orphans of the Calgary Police Force and Fire Departments.