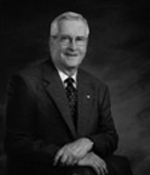 Mr. Hotchkiss, O.C., A.O.E. manages his own business interests in oil and gas, real estate, agricultural and professional sports. He was born in Tillsonburg, Ontario and, after World War II service in the Canadian Merchant Marine, graduated from Michigan State University with a Bachelor of Science degree in Geology. Mr. Hotchkiss has spent his entire working career in Calgary. He is a member of several Canadian and American professional societies relating to petroleum and mineral exploration and has served on a number of corporate Boards. He is a Chairman of the Board of Trustees of the Alberta Heritage Foundation for Medical Research and is past Chairman of the Foothills Hospital Board. He is a Director of the Hockey Hall of Fame, serves as NHL Governor for the Calgary Flames and is currently serving his fifth consecutive term as Chairman of the NHL Board of Governors. Mr. Hotchkiss is an Officer of the Order of Canada and holds an Honorary Doctor of Laws degree from the University of Calgary and an Honorary Doctor of Science Degree from Michigan State University. He was awarded the Alberta Order of Excellence in 1998.