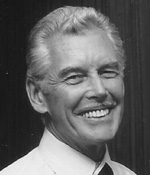 Was born in 1916 by the banks of the Red River in Kildonan County, Winnipeg Manitoba to Irish immigrants. His father, James Gallagher a soft spoken dreamer, firefighter, market gardener and the eventual Reeve of the County and his mother, Kathleen Gallagher a rooming house owner and strong willed realist and educator. Athletic and confident beyond his years as a youth, Jack was marketer and vegetable salesman for the family business from early in life. Observant, caring and curious…… he became magnetically drawn toward exploration and discovery in the world of Geology, where he worked his way through University of Manitoba in the summers with the Geologic Survey of Canada, portaging from lake to lake naming the smaller ones and navigating a canoe using early air photos of The North. Earning $2.50 per day and living on beans, and bacon and cooking bannock, he gained a vision of the tremendous mineral wealth of the Canadian North.

The dirty thirties were just beginning as Jack looked for a solid job in his chosen field. He headed West to see the wonder of the Athabasca River Oil Sands deposits and squeeze the sands through his fingers, a touchstone image that remained in his colorful stories of the era. He was too early and too inexperienced for that boom that was still to come in Northern Alberta, so he pushed on toward California, the site of an earlier oil boom. He stuck out his thumb and got a ride into central Washington State, where he got stuck for about a year selling Caterpillar Tractors between Walla Walla and Spokane. He said that it was the best paying, highest commissioned job that he ever held.

Then onward to California, abandoning potential financial fortunes in favor of his dream of discovery in the oilfields, he landed up in Bakersfield, working as an oil scout for Shell Oil. He described crawling in the ditches, scouting near a Keck Oil Company rig and celebrating with the crew when the well came thundering in. Old Man Keck rolled up to the rig in his big black car and ran the Shell Oil Guy off the site with much bluster and bravado. Sitting rigs in the desert and working long hours for someone else started to turn over in his mind….why not go foreign…and when the opportunity to travel with Shell to Egypt was offered, Jack grabbed his hammer and bedroll.

War broke out just as Jack had established in the new Shell Egypt Job…Shell decided to pull back and be closer to home and closed their vulnerable African office……Jack found that the Americans were staying and joined Exxon ( then Standard Oil of New Jersey).

Egypt held more adventures and the Sinai desert needed mapping, just the job for a Canadian. They liked him, Dr. Walter Link was his new world-wide boss and the challenges were just beginning.

On loan from Standard Oil to the British 8th Army, Jack became part of an advance group seeking water to support the defense of Africa, the Suez Channel and the Middle Eastern oil fields from the advancing German army under General Rommel. The water they found proved to be the vital commodity in the defeat of Rommel, The Desert Fox. With Standard Egypt Jack also had the opportunity to assess the early Middle Eastern Mega Oil-Fields of Iran and Iraq.

As the war continued in the Pacific theatre, Standard Oil moved Jack to exploration in Central America, Guatemala, Panama and the Caribbean. As crew chief, Jack got unprecedented access to fascinating geology and people. He learned that Canadians had a special kind of acceptance as Jack proved by getting exploration permits that spread to Peru in South America. Language was no barrier, as Spanish, however crude, was the tool that Jack used in dealing with dictators and laborers alike. The head waters of the Amazon with primitive tribes was next on the list of challenges. Dug-out, canoes were the main mode of transport and exploration on the Amazon. The tribesmen seemed to accept this white man with a beard and became his most reliable field exploration crews. Disease, snakes and accidents punctuated the risks of the place but at least the Canadian biting black flies were not a part of this beautiful rugged tropical landscape. The Andes mountains were conquered by flying DC-3 air-photo reconnaissance trips and ground mapping soon followed. Political coups and unrest was often the friend not the enemy of the foreign oil explorers. The new President of Peru, after the coup, was the guy in the bar who had talked to Jack just before his last trip into the field.

The sideways move to head office in New York and management training in Boston and the post war boom was next. Jack’s dreams were still alive of a move back to Canada and when Standard Oil’s subsidiary Imperial Oil found Leduc in 1947 near Edmonton, Jack requested a transfer back home in 1949. His new Job was building housing in Devon Alberta to support the boom but the wheeling and dealing of geology and the love of his life Katie were soon to follow. With all the potential of Canada and all the contacts of his management training in Boston and New York, Jack knew what his next move should be. He created Dome, married, built a home, had his first born son in 1950 and drilled his first oilfield up in the next 2 years. What a ride and what a risk taker he proved to be. A single risky discovery at Redwater Alberta, drilled on a single line of seismic shot through the North Saskatchewan river, paid off the 7 Million dollars of debt that Dome owed as a sinking fund that was due back to the endowment funds of MIT, Harvard and Princeton who had loaned Dome it’s start-up money. Other large discoveries at Drumheller and Provost followed while Jack was still the only professional employee of Dome. The large Natural Gas Discovery at Provost proved to be the critical field to establish the reserve base and economic foundation of TransCanada Pipeline to Eastern Canada.

With the Natural Gas came the expansion into the cryogenic turbo expander NGL liquids business, a firm foundation of cash flow to set the stage for “Shooting for the Moon” as he used to call his once a year rank exploratory wildcats. The staff of Dome were always a huge part of the Dream Moon Shot; everyone felt the renewed energy of the latest great adventure. It was not just another job.

The rise of Dome was meteoric and abrupt, Jack always wanted to grow by the drill bit, but became rapped up in the need for financial size to take on the Beaufort Sea and the Canadian Arctic. This was a very political time and Jack played all his cards and bet most of his newly acquired debt on the future of Canadian exploration in the North.

Boldly he expanded into an ice infested and politically volatile place and time. Prices rose and inflation hit the industry. Canmar, a fleet of drilling vessels and ice breaking ships supported and engineered a uniquely Canadian adventure far ahead of it’s time. The salesman was back, and the profile was high but the objective of the Dome team, to prove the existence of an economic oil and gas supply in the Beaufort Sea was and is an enduring National Treasure.

When the price of Oil stumbled and dropped and the cost of debt went too high, a new reality walked the halls of Calgary and Dome. The disappointment was real and the losses were large, but the Dome story gave a new Canadian perception to the terms Wildcat, and Entrepreneur and Team.

Always physically active, Jack swam, hiked and ran throughout his life, these activities prepared him for the quiet social sport of Golf or his passion for skiing or jet boating on the rivers of western Canada. Jack was able to unwind in the company of strangers or with his climbing buddies from Lake Windermere at a mountain log cabin by a lake inwardly and outwardly smiling. He was always interested in people…… he would openly pass on his wisdom to anyone at any level of life. The cleaning staff of his building knew him from their late night talks and PM Pierre Trudeau or the President of Ireland got his advice and some suggestions on how to govern the country. True to his Irish genes, he was a storyteller and would always punctuate gatherings and speeches with Humor.

To participate in the game of life, be counted, enter Science fairs, join Toastmasters, Dale Carnegie or Junior Achievement. And if you were going “to dig a ditch”, be sure that it was the best ditch and that you would always be proud of it. We dug a lot of ditches …..together, together because he believed that the best teacher was the act of doing.

Jack was “an eternal optimist”, an essential ingredient in his character which even followed him in his last days of life. The sale and reduction of Dome Petroleum to a collection of properties, not people, was very hard to choke down. It showed that the real rewards of all his efforts was to make the world a better place for people to flourish and grow. From the success of Dome flowed the energy to make Calgary and Canada a better place and for the dreams of many others to bloom. He admired and worked well with many philanthropic and political people in the city, province and country. He had great pride in the city that had grown out of the dust of the early oil industry. Jack was one of the proud group of visionaries who crested Eau Clare Land Development, a jewel of land that became office, condo, YMCA and parks on the Banks of the Bow. He gave back to the University of Calgary and the Geology Department to create the Gallagher Library. He created the Visiting Scientist Fund at the University of Manitoba to broaden the vistas of the students and faculty there. He initiated and funded the Galileo Fellowships in teaching at the University of Calgary and helped to improve the techniques of Education at all levels in our City through teaching fellowships in the primary school years. He helped to fund the first colonoscopy suite in Calgary with Dr. Hershfield who saved many lives that would have been lost to Colon Cancer. He sponsored lecture series in Calgary to broaden the knowledge of Geology in his community.

He was the president of IPAC, the Independent Petroleum Producers of Canada, in it’s formative years. He was a member of the Research Council of Alberta, The Science Council of Canada, an executive of the United Way in Calgary, was a strong supporter of the early Reform Party of Canada and the Triple E Senate movement. Education was a strong theme for Jack, as he created a Dome scholarship program for the children of Dome employees and funded 25 doctorate fellows in Education in Calgary. He looked actively for worthy social causes and created an education fund through the Calgary Foundation before his death to carry out his long term wishes for educators. Jack was honored as a Doctor of Science by the University of Manitoba and the University of Calgary presented Jack with a Doctor of Laws Degree. Canada honored his contributions and his lifetime achievements by appointing Jack to The Order of Canada.