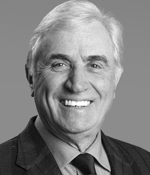 Gerry first began his career in Scotland at his father’s Ford Dealership where he was involved in converting vehicles to hand-controls for disabled drivers.

In 1969 Gerry headed west and began work for Maclin Ford as a Sales Representative and then spent five years as the New Vehicles Sales Manager. In 1979 Gerry purchased a small GM Dealership in Vulcan, AB and by 1983, Gerry bought Southridge Mercury Lincoln which is now Woodridge Ford Lincoln.

Over the past 36 years, Gerry has grown the business to include six dealerships city-wide, a Collision Centre facility and other business enterprises. The Wood Automotive Group has pioneered and fine-tuned customer marketing initiatives, the concept of vehicle leasing and cost effective, excellent service, and fostering life-long relationships.

As a recognized leader in the Canadian Automotive Sector, Gerry has accepted many key appointments with local, provincial and national associations. As a member of several executive bodies, he represents Canadian automotive dealers to both manufacturers and governments.

He is highly active in the Calgary and Okotoks communities. Some of Gerry’s involvements entail organizations such as the Calgary Stampede Corporate Hospitality Committee, Canadian Down Syndrome Society, United Way, Inclusion Alberta, Robbie Burns Club of Calgary, Mustard Seed, Big Brothers/Big Sisters, and The Salvation Army. The Woodridge Charity Golf Tournament celebrated its 30th and final year in 2015 and with the tireless efforts and hard work of his wife Elaine, has raised almost 4 million dollars in funding towards the building of the PREP School and programs for individuals with Down syndrome. Gerry has furthered his commitment to supporting children’s charity as a major sponsor of the Shaw Charity Classic Golf Tournament and the creation of the Wood Automotive Group Kid Hero of the Month Award in support of KidSport and Comrie’s Sports Equipment Bank.