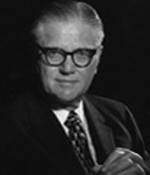 Frederick Charles Mannix was born on October 21, 1913 in Edmonton, Alberta, son of Edmonton pioneers Frederick Stephen and Byryid Fitzpatrick Mannix. His father was a construction pioneer from Manitoba who moved his contracting business to Edmonton in 1905 to work on the railway grade for the Great Northern Railway.

Fred C. began working with his father at a very early age while still at school, but in the 30’s he began his career in earnest, becoming a partner with his father in 1935. These early years with his father as mentor gave him a solid foundation in general contracting. In 1942, when his father’s health was failing, the decision was made to sell the business. However Fred C. kept an ownership position and headed up the new organization, which was set up as Canadian subsidiary of the Morrison-Knudsen Construction Company of Boise, Idaho. Fred C. was now learning how to do things on a larger, more international scale. During the remainder of the 1940’s, he participated in the building of many of Canada’s major infrastructure projects including highways, pipelines, mines, dams, railways and airports. He will long be remembered as one of the great builders of our country. In 1951, Fred C. was able to bring full ownership of the outfit home to Canada, under the Mannix Construction banner.

During the 1950’s, having established one of Canada’s largest construction companies, Fred C. Mannix diversified his business, creating the Loram Group of Companies and established what became during his time the country’s largest coal producing company, Manalta Coal Ltd. In the mid-1950’s his group was successful in their bid to construct and own the Pembina Pipe Line Ltd. which later diversified into oil and gas production, eventually becoming Pembina Corporation, the largest owner/operator of crude oil and liquids feeder pipelines in Canada. Another of his companies, Loram Maintenance of Way, Inc. based in the United States became a leading designer, manufacturer and service contractor of railroad maintenance equipment working principally in North America.

Fred C. Mannix withdrew from active involvement in the business in the 1970’s and at that time, passed the responsibility for the perpetuation of the group of companies over to his two sons, Frederick P. Mannix and Ronald N. Mannix. Fred P. and Ron grew the group to maturity in the 80’s and 90’s and capped off a century of the family business started by their grandfather with the divestiture of the energy assets in 1997. Manalta Coal and Pembina Pipeline and Pembina Resources Inc. were sold to the public markets. Fred P. is now operating his own group of companies, Mancal Corporation and Ron operates Coril Holdings Ltd., each independent, but each built solidly on their father’s legacy from the Loram Group.

In 1961, Fred C. Mannix and his company, Mannix Co. Ltd. won the prestigious Mole award presented by the United States construction industry—the first company outside the U.S. ever to be so honoured. Other honours bestowed on him include an honorary Doctorate of Laws degree from the University of Alberta in 1972, an honorary membership in the Association of Professional Engineers, Geologists and Geophysicists of Alberta, as well as honorary membership in the Alberta Roadbuilders Association, and the Hall of Fame of America’s Builders. Fred C. was one of only two living laureates inducted into the Canadian Business Hall of Fame when Junior Achievement founded it in 1979. In 1985, he was named an Office of the Order of Canada, and in 1987, he was made an Honorary Associate of the Conference Board of Canada.

In 1939, Fred C. wed Margaret Ruth Boughton of the Ottawa-Hull region and together they raised their three children on the outskirts of Calgary in the Fish Creek area. Fred C. and Margie Mannix established the Carthy Foundation in 1965, together with their children Fred P., Maureen and Ron, as a family legacy. Through this family foundation they taught their children to give back to the community in which their businesses flourished. The foundation is now being stewarded by Mr. and Mrs. F. C. Mannix’s eleven grandchildren. In 1998, Fred, Maureen and Ron endowed the foundation with $50 million in memory of their father and mother in order to ensure their legacy was continued for future generations of Canadians. Fred C. was also one of the founding members of the Calgary Foundation in 1955.

Fred C. Mannix passed away at the age of 81 on July 29th, 1995, but his many legacies remain for all. He was an intensely private man and remarkably reticent about his own past accomplishments. The story of life, however, reveals a man of exceptional talent and vision, a master builder whose works display an impressive scope of accomplishments helping to build our modern day Canada and many parts of North America.