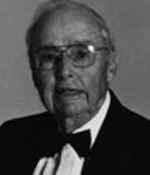 Edward Galvin significantly influenced the structuring and development of the Canadian oil and gas industry. Respected as a gentleman and a builder in the industry, he became known as a mentor to entrepreneurs and a builder of strong companies.

After graduating from the University of Southern California, Edward Galvin began his prestigious career as a gas analyst and petroleum engineer. In 1954, he moved to Calgary and was appointed General Manager of Pathfinder Petroleums Ltd., which at the time was a small independent company with 30 employees and annual gross revenues of $450,000.

During his time with Pathfinder, he engineered numerous exploration and development projects and saw the company evolve into Medallion Petroleums, then Canadian Industrial Gas and Oil Ltd., and later into Norcen Energy Resources Ltd. When Norcen sold in 1997 it employed over 4,000 people and had annual revenues of $1.5 billion.

Mr. Galvin left Norcen at the age of 65 and founded Poco Petroleum Ltd., which he built into a major independent Canadian oil and gas company. Poco sold in 2000 for $4.5 billion.

In 1998, he was awarded the Paul Harris Fellowship, recognizing his many contributions to the community. He also initiated an endowment fund at the University of Calgary for the purpose of battling substance abuse.

Through his efforts with the United Way and the Calgary Foundation, he established a general-purpose community fund in honour of his wife, Frances, which has reached nearly $6 million. It gifts monies annually to a wide variety of community needs and, in part, is administered by his children, grandchildren and great grandchildren.