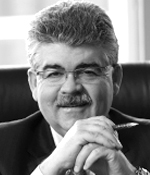 Doug Ramsay, born in Edmonton, before the tender age of 7 had lived in various towns throughout Alberta before settling back in Brooks. Doug began his career working on drilling and work over rigs throughout Alberta and Saskatchewan. He first went to work in the pressure pumping business for BJ Well Services in 1973.  He returned to school to earn his Petroleum Engineering Technology Diploma from SAIT Polytechnic. He later received the designation of Registered Engineering Technologist from ASET.

Upon graduation from SAIT, Doug went to work for Dome Petroleum as a Drilling and Completions Foreman. Doug then joined Delta Consultants as a consulting engineer, where he was responsible for drilling, completions and production operations for a number of oil & gas companies. In 1981 at 26 years old, Doug joined Eagle Exploration as Manager of Drilling & Completion Operations from the Wichita, Kansas office where he handled drilling, completions and production operations in Kansas, Oklahoma and Texas. In addition, he was responsible for the management of the company owned drilling rig.

Doug joined American Fracmaster in Oklahoma where he held various sales and operations responsibilities transferring back to Canada in a Sales Manager role. He rose through the ranks to be appointed President in 1992 responsible for the company’s business at that time in Canada and Russia.

After a brief hiatus in the mid-1990’s when Doug built his family ranching and real estate business, Doug joined forces with Ron Mathison, Gordon Dibb and Robbie Roberts in 1999 to transform several distressed oilfield service firms to form Calfrac. Calfrac grew from a humble start up to a world class pressure pumping company today with operations in 6 countries, sales of over $2.5 billion and excess of 4,500 employees. Doug handed over the reigns as the CEO in January of 2013 to Fernando Aguilar – a seasoned service company professional. Doug now serves as the Vice Chairman of the corporation.

Doug and his wife, Susan, have not forgotten what is important to them and community with major contributions to STARS, by forming the Susan Ramsay Advanced Skills Institute and to SAIT, the Ramsay Centre for Petroleum Engineering. Most recently Doug and Susan made a major contribution to Foothills Country Hospice focused on the expansion of the facility to better service people in their last days.