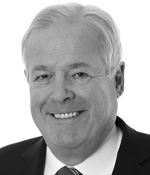 David grew up in Montreal where he obtained a Bachelor of Arts (Honours Economics) Degree from Loyola College (now part of Concordia University) and a Law Degree from McGill University.

He practiced law for several years as a trial lawyer at Ogilvy Renault in Montreal. At the age of 36 he moved across the country to Calgary with his wife Gail and three young children, Tara, Matthew and Shaun. He and his wife have resided in Calgary since late 1977.

He is currently Chairman of the Royal Bank of Canada - Canada’s largest bank. He is also Chairman of Encana Corporation - one of North America’s largest independent natural gas companies.

Mr. O’Brien was Chairman of the Canadian Association of Petroleum Producers 1994 - 1995 and was Chairman of the Canadian Council of Chief Executives (formerly the Business Council on National Issues) from 1999 - 2001. In addition, he served on the Board of Governors of the University of Calgary for six years from 1997 to 2003 and was Chancellor of Concordia University for five years from 2006 to 2010.