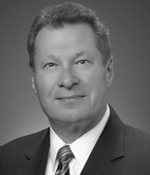 David Johnson holds a Bachelor of Degree in Petroleum Engineering from the University of Wyoming and has over 35 years of diverse experience in the oil and gas industry, including a background in production, reservoir evaluation and operations.

David is also a director of Zedi Inc. (an oilfield services company), Pinecrest Energy Inc. (an exploration and production company), and TORC Oil & Gas Ltd. (an exploration and production company). He is a member of the Association of Engineers, Geoscientists of Alberta and has served twice as a Governor of the Canadian Association of Petroleum Producers.

He has also been active in many community and charitable societies. He is a supporter of United Way of Calgary & Area. David personally donated $5 million to the Promising Futures Campaign to create the Trades and Technology Complex. In recognition for his donation, one of the buildings has been named after him – Johnson – Cobbe Energy Centre. David was awarded the Distinguished Alumnus Award from the Southern Alberta Institute of Technology where he graduated prior to attending the University of Wyoming.