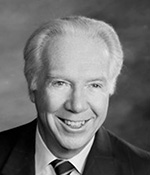 David E. Mitchell was born in Calgary in 1926. After finishing high school at the age of 17, he decided to join the Royal Canadian Air Force. During training, the Air Force discovered he was underage, so he had to “age up”. During this time, he worked at the Hudson’s Bay Store in Calgary until he could return to the Air Force, where he completed his aircrew training in 1945.

He started his career in the oil business in what he termed “the classic fashion,” by digging ditches in Turner Valley. He then enrolled in university and worked summer months as a geological field assistant. In 1950, he graduated from the University of Oklahoma in Petroleum Engineering. After graduation, he joined Great Plains Development Company of Canada Ltd. As a trainee engineer, he did land work and scouting, later working in wildcat drilling and production operations. His responsibilities gradually increased and he soon became Head of Drilling and Productions. In 1956, he was appointed Vice President and over four years, moved up to oversee the firm’s head office in Calgary, and eventually became Director of the company. By 1963, he was appointed Vice President of Finance and Corporate, and the following year became the President & CEO. He remained in this position until the end of 1974 when Great Plains was sold. In January 1975, Dave started Alberta Energy Company (AEC) with a staff of four. The Alberta Energy Company developed Alberta’s natural resources responsibly and profitably. He led the company on behalf of its 60,000 shareholders, in an era of corporate diversification fervour. He went on to become the Chairman of AEC.

Dave was an enthusiastic participant and supporter of many local and national voluntary endeavors, and received many accolades for his community activities. He founded, and was President of, The Ernest C. Manning Awards Foundation. He was a member of the Senate and Board of Governors at the University of Calgary; Chairman of the Calgary Police Commission, Honorary Chairman of the World Police and Fire Games; Honorary Calgary Fire Chief, General Campaign Chairman of the Calgary United Way. Dave was one of the three individuals who brought JA to southern Alberta and became one of the chapter’s first Board members. Dave was married and had two children.