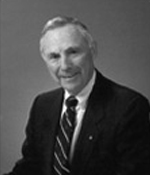 The Calgary Business Hall of Fame is privileged to honour Daryl K. (Doc) Seaman, Chairman and President of Dox Investments Inc. Daryl K. (Doc) Seaman is known for his entrepreneurial zest and has risen to become a prominent member of the Calgary business community over the past five decades. In 1949, he and his two brothers incorporated Seaman Engineering & Drilling Company Limited. The company would later expand into oil and gas drilling and become Bow-Valley Industries Ltd. In 1988, Bow Valley was taken over by British Gas PLC and Daryl (Doc) Seaman continued on as Chairman until 1991.

Throughout his career, Daryl K. (Doc) Seaman has served as chairman and member on various committees including the Calgary Sports Advisory Committee, Royal Commission on the Economic Union and Development Prospects for Canada, Team Petroleum Olympics Fund and Governor of the Olympic Trust of Canada and Chairman of the Alberta Division. Receiving his B.Sc in Mechanical Engineering at the University of Saskatchewan, he was involved with many University of Saskatchewan committees between 1969 and 1988 including the Engineering Fund, National Corporations Committee, Geological Sciences Fund and Engineering Advancement Trust.

Daryl (Doc) Seaman’s achievements and contributions have been recognized throughout his career. Between 1941 and 1945 he served with the 500 Squadron R.A.F. in North Africa and Italy as a R.C.A.F. pilot and was awarded the Government of France Citation. He has received a honourary life membership and Frank Spragins Award from the Association of Professional Engineers, Geologists and Geophysicists. He is the Founding Governor of the Hockey Canada Foundation and has been inaugurated into the Saskatchewan Oil & Gas Industry Hall of Fame and Canadian Oilmen’s Hall of Fame. He is the recipient of the McGill Management Achievement Award, Paul Harris Fellowship Award, and the Officer of the Order of Canada. He was recognized with a Honourary Regent from the Athol Murray College of Notre Dame and has received a Honourary Doctor of Laws from both the University of Saskatchewan and the University of Calgary.