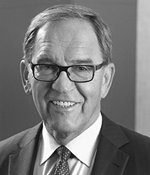 Clayton Woitas was born in 1948 in Edmonton, AB. He holds a Bachelor of Science in Civil Engineering from the University of Alberta. Clayton has 35 years of experience in the oil and gas industry with extensive experience in the areas of acquisitions & natural gas exploration and production.

His contributions to the business community were acknowledged as Saskatchewan Oilman of the Year in 2003 and as Alberta’s 50 Most Infulential People in 2013 by Alberta Venture Magazine.