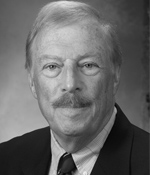 He was previously Chairman and CEO of Monarch Communications Inc., the parent Company of Monarch Broadcasting Ltd. and Monarch Cablesystems Ltd.

Bill has received numerous awards, including the Milner Fenerty Pinnacle Award (1995), the Queen Elizabeth II Golden Jubilee Medal (2003) and the Queen Elizabeth Diamond Jubilee Medal (2013). He also received an Honourary Doctor of Laws from the University of Lethbridge (2006) and the Alberta Order of Excellence Award (2016) and an Honorary Degree from the Medicine Hat College (2017). His team also won the champion’s trophy in the wild cow.

He is the third generation of his family to reside in Medicine Hat. Bill attended public schools in Medicine Hat, at St. Andrew’s College in Aurora, Ontario and at the University of British Columbia in Vancouver.