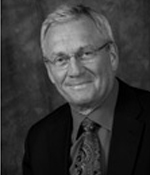 Allan (AL) Markin is a distinguished Alberta business and community leader who is as innovative as he is successful. In his business career, he has helped to create the prosperity the province enjoys today. In his philanthropic endeavors, he has ensured a brighter and healthier future for his fellow Albertans.

He was born on May 6, 1945 in the town of Bowness, which at the time sat outside the Calgary corporate limits. The small community eventually became part of the city and Allan became a proud Calgarian. His parents, Andrew and Florence Markin, set an example of hard work for Allan and his siblings: Diana, Jerry and Kathy. The rhythm of family life was set to the pulse of classic Alberta traditions – curling and hockey in the winter and summers spent outside under the blue Alberta skies. Al was a keen scholar and natural athlete who quickly developed what would grow into a lifelong passion for sports in general and hockey in particular.

When choosing a profession, he set his sights on electrical engineering and enrolled at the University of Alberta campus in Calgary. But when the time came to transfer to Edmonton to complete the degree, Al knew that his future lay in the oil and gas sector. He switched his focus and graduated in 1968 as a chemical engineer.

He started in the field learning every facet of operations, form drilling to completion. He then moved to increasingly senior responsibilities with Amoco Texas and Merland Exploration before joining Calgary's Poco petroleum as President and Chief Executive Officer in 1982. Six years later, Allan became Chairman of the Board of Canadian Natural Resources Limited (CNRL). The firm would grow to become one of the most successful oil and gas companies in the world but it started as a small operation with just six employees and very limited capital. Allan credits the success of CNRL to three factors: a good vision combined with good strategy and a healthy dose of serendipity.

In many ways, the company's successful vision reflects the innovative spirit and desire for balance that permeates Allan's approach to life. He raised industry eyebrows when he unveiled the company's decidedly unconventional vision statement: "to develop people to work together to create value for shareholders by doing it right with fun and integrity." Allan also holds a rare commitment to getting out and meeting every field staffer at least once a year.

The second factor for success – the good strategy – Allan credits to his friend and business partner. The serendipity some might discuss as simple good fortune, but those who know and respect Al will tell you that he's created his successes through tremendous skill and imagination along with unrelenting energy and hard work.

Al has applied those same qualities to his efforts to serve the community and province he loves. He has focused his contributions on the areas of health care and education. Al's contributions to health care have placed a decided emphasis on wellness and disease prevention. He endowed the Markin Chair in health and Society at the University of Calgary and Invested in the schools Institute for Public Health. Al has also offered significant support for Markin Hall, the Management and Health Services Building at the University of Lethbridge. Al's interest in preventative health care also extends to the support he offers field CNRL employees. Under his guidance, the company developed a comprehensive, gold standard wellness program that includes flying doctors to field operations as needed. Al has also spearheaded nutritional research in northern regions and has implemented the Pure North S'Energy Project to provide supplements and nutritional guidance to prevent disease and enhance employee health and longevity.

Al has offered equal contributions to developing educational opportunities for Albertans. He served as a driving force behind the creation of St. Mary's University College in Calgary, an institution that reflects Al's belief in the importance of spirituality and academic freedom. He also support the Markin/CNRL Natural Resources Engineering Facility at the University of Alberta, the Oil Sands Graduate Research Award at the Northern Lights College and the Marking Flanigan Distinguished Writer in Residence Program at the University of Alberta, with the stipulation that recipients make room in their timetables for arts courses. This approach reflects Al's originality and is in keeping with his own commitment as a lifelong student of the liberal arts.

Other organizations that have benefited from Al's community leadership include the United Way, The Alberta Adolescent Recovery Centre and the Nature Conservatory of Canada. His hometown enjoys the vision he has provided as a longstanding co-owner of the Calgary Flames Hockey Club. Much further afield, Al has given valued support to organizations such as World Vision Canada, the Sri Narayani Foundation in India for the Education of Children and programs for children in Chinese Tibet.

Al holds Honourary Doctor of Law degrees from the University of Lethbridge, the University of Calgary and the University of Alberta. He received an honourary fellowship from St. Mary's University College, The Alberta Centennial Medal and the Pinnacle Award of Business Excellence in Alberta. In 2004, he was named the City of Calgary Citizen of the Year. Al is also a multiple recipient of the Wall Street Journal Gold Award for Outstanding Achievement. In 2008, the Governor General announced Al's appointment as an Officer of the Order of Canada.

When asked what he wishes for the many students he has encouraged and supported over the years, Al offers imply that he hopes thy enjoy "exceptional values and positive balance throughout their lives." If those students are in need of a role model on how to achieve that balance, or how to serve their community with compassion and true distinction, they need look no further than Al Markin.