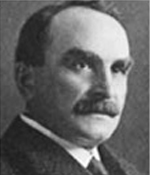 Alfred Ernest Cross was born in Montreal and came to Alberta in 1884. The following year he started the A7 Ranch west of Nanton, Alberta. He founded the Calgary Brewing and Malting Company in 1892, and was president until his death. He served on the North-West Assembly from 1899 to1902. He was a founding member of the Western Stock Growers' Association, Calgary Board of Trade and the Ranchmen's Club, and was one of the "Big Four" who founded the Calgary Stampede. He was also instrumental in establishing Alberta's petroleum industry. He started Calgary Petroleum Products in 1912, and was a director of Canadian Western Natural Gas. In 1961 A. E. Cross School in Calgary was named in his honour.

He attended private school and high school, later entering the Montreal Business College. He continued his education for a time in England as a student at Haileybury College, Hertfore, from 1875 until 1878. Returning to Canada, he attended the Ontario Agriculture College, 1879 until 1881. He graduated from Montreal Veterinary College in 1884.

The close of the 19th century saw Cross wearing even more hats. He was also elected as Conservative member if the East Calgary constituency to the Legislative Assembly of the North West Territories and participated in events leading up to the birth of the Province of Alberta. In 1899, he married Miss Helen Rothney Macleod, and had seven children. Mr. Alfred Ernest Cross passed away in 1932 at the age of 70.